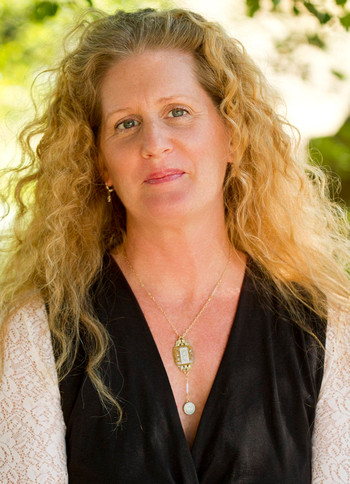 I was born and raised in Delaware and attended art school at Kutztown University in Pennsylvania. It took 2 years of college for me to find a subject matter that articulated my artistic ideas, finally discovering it in the human form. Gestural lines found shape with the figures, offering me a vehicle for my expression. I worked in charcoal, dry pigment and etching. I also fell in love with the range of handmade, exotic papers that one uses with printmaking and drawing. For me, the tactile element was an integral aspect of the act of drawing.

After graduating with a Bachelor’s of Fine Arts, I continued drawing and my focus remained on the figure, but I was also beginning to experiment with bookmaking. It all started with a need for a special gift, but with limited funds to purchase something truly unique. I had many kinds of handmade papers that I had accumulated over the years so I took all the materials I had, and set out to build a book. Because I had no training in book arts, I opted for the simple, open spine style of bookmaking seen widely in Japanese handmade books and followed in that tradition. That first book was a big lesson in all I did not do correctly. But, it was an enormous step toward what was to become a seven year business that culminated in the honor of exhibiting in both the Smithsonian Craft Show as well as the Philadelphia Craft Show in 1994. My handmade books were introduced when only a few artists were working in book arts. They were one of a kind, archival pieces that integrated beautiful papers and collage work that would evolve over seven years.

After a brief hiatus from the art scene, during which I relocated from the Philadelphia area to Sonoma County California, I found myself going back to the figures that still persisted in their desire to express. This time, however, I integrated the figures into small, gouache paintings via collaged photo transfers of my early figurative work. The collage work I had been doing with the books inspired a complete departure from my earlier large figure drawings. The images needed to be small, contained where scale was very important.

From the beginning of my work with gouache, before the collage came into play, I was urgently layering, scraping away and layering paint back in – all in a very small format as the small scale was my desire to be a whisper as opposed to a shout.. After that first year of painting, I realized that everything I was feeling but could not process emotionally, was expressing itself through this body of work. Eventually the focus turned from pure release, to the desire to create a more complex message using materials ranging from old maps, book text, exotic papers, paint, in addition to the figurative images. With this smaller scale, I was challenging the viewer to come close, discover and be curious.

After the birth of my daughter Luna, I had very little time to work in the studio; she became my creative project. During that time, I continued to gather materials - mostly old, antique and worn, with their own stories that history had embedded. The ideas were free flowing, where I would write a word, phrase or sketch on a scrap of paper and put in away for another time.

When Luna was 5 years old, I was able to carve out some time for my studio work. Since then, my pieces have become more allegorical and dimensional. Eventually, the concept of the figure went from literal to metaphorical – a container, a vessel. When I start a piece, I do not have any specific visual idea of what is to be created. Only a sense, a poem, a feeling or emotion that I want to articulate visually… and I just begin. Eventually the idea reveals itself through elements I introduce or remove. More times than not, the challenge becomes when to stop. When I see that point of completion (before I pass over it), that is the moment of grace. The layers were preparing me for more topography, and my daughter reminds me not only to keep asking questions, but to surprise myself with unanticipated answers.
© Erika Schmitt / Vessels of the Soul
Powered by ZENFOLIO User Agreement
Cancel
Continue